Brother of Terry Fox Thanks Salisbury 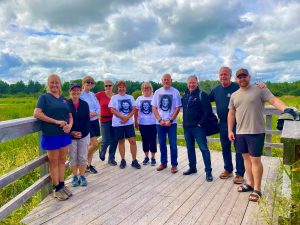 The Village of Salisbury was honoured Tuesday morning with a

visit from Fred Fox. Callie Pinnock, Director-Community Development for NB/PEI Terry Fox Foundation, reached out on Friday afternoon to say Fred would be passing through on Sept. 6 and would like to stop and thank Salisbury for its continued support of the Terry Fox Foundation.

Village of Salisbury Director of Recreation and Wellness Jarrett Crossman and Assistant Director Donna Hunwicks Hopper, along with Village staff, Mayor Rob Campbell, Councillor Doug Hamer, and village volunteers joined Fred and Callie in a walk around the Wetland Trail where Salisbury’s Terry Fox Run is held each year. (For more on the 2022 Terry Fox Run in Salisbury, click HERE.)

Fred’s East Coast travels will take him to Newfoundland and Labrador to visit, once again, where Terry Fox began his Marathon of Hope on April 12, 1980.